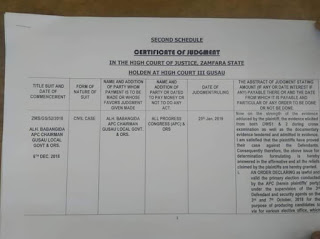 High Court lll sitting in Gusau, Zamfara state, has upheld the primary elections conducted by the state ruling APC on the 3rd and 7th of October, 2018.

Giving the verdict over the case after cross examination of witnesses, the presiding Judge, Justice Muhammad Bello Shinkafi affirmed that elections for the gubernatorial, senatorial, House of Representatives and House of Assembly seats were conducted and won by the ruling APC.

It could be recalled that in a suit case number ZMS/GS/52/2018- Sanusi  Liman Dan Alhaji and 137 others Vs APC and 143 others, Plaintiffs had prayed the Court to compel the national body of the APC and the INEC to accept results of the said primary elections which now the Court granted.

Justice Muhammad Bello Shinkafi ,however, had asked national body and the ruling APC and headquarters of the Independent National Electoral Commission, INEC, to accept the results and names of respectives successful APC candidates that won the election.

Commenting on the court verdict, counsel to the plaintiffs, Barrister Sirajo Garba Gusau, said the judgement was in tendom to our demands regarding, accepting the elections, compelling INEC and national body of the APC to accept candidates that won, and that the court should stop the national body of the APC from substituting names of successful candidates with other names.

Counsel to the 4th and 144 dependants, Barrister J. C. Shaka, while responding to the verdict, simply congratulated the people of Zamfara state and also commended His lordship for making the judgement within the shortest time.

“My reactions, I can not objectively say what I would do now, but I have to confide with my clients, inform him the details of the judgement, and review of the judgement, I will then know what I will do “, counsel Shaka stated.