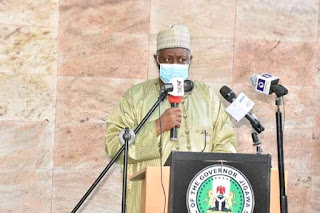 Jigawa state Government has announced the lifting of the lockdown imposed in Ringim and Sabon Garin Yaya after all contact of the index cases returned negative.
The Commissioner of Health Dr Abba Zakari who made the announcement to newsmen in Dutse says 14 new cases have been recorded in the state whereas 10 patients have been cured and discharged after testing negative twice.
According to him, the state has so far discharged 81 patients out of 225 confirmed cases with 3 fatalities.
Meanwhile, Dr Abba added that the proposed molecular laboratory in the Dutse General hospital will begin operation on Monday after the state government procured all the necessary equipment for the testing of covid 19.
“we have began installation and by Monday we will bring to an end the testing challenge in the state which requires moving samples from Jigawa to other states.” The commissioner said.