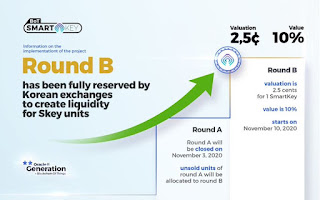 SmartKey DeFi connector, a new Generation II project that may have a chance to become a new ChainLink?

Since the last few more and more has been said about the new Generation II project called SmartKey DeFi. The project does not sell a Vision or an idea but is already working platform in the version above the MVP. The project is being tested by several large, well-known concerns as well as The value exchange economy “sharing economy”. SmartKey is at pre-sale stage and is doing great .

I decided to take a closer look at the project, assess the chance of success and verify the material and its quality.

The White Book is the basis of “Vision” and here is the surprise! The project shows not only what it is, how it is defined, but it ultimately defines the market and its niche – industries such as (Airbnb, carshering, etc.). SmartKey presents the processes of adapting physical services by connectors.

Exact use cases are the result of the hard work and experience of the team who already did a lot in IoT space.  According to information on Twitter they have been implementing the project since the beginning of 2019.

Diagrams show in a simple way how SmartKey will implement the service. Going further, there is a number of project partners listed such as: KIA – the car manufacturer or Teltonika company which is the 3rd largest producer of GSM-GPS devices in the world. The project presents tasks and mutual value between cooperation. Why is it so important? A typical WP (99%) of a fundraising project is a gallery of logos, partners without any description how the partner may use the new technology. Here the cooperation goes much further. This surprised me at SmartKey. WP is an early version of 0.3 but it contains important information other than what we are used to read.

The project presents an overweight that it intends to build over the leader of the Oracle services market – Chainlink.

In conclusion, I invite you to read the details on the website https://smartkeyplatform.io/

Below we present the published animation presenting the SmartKey DeFi connector project which explains what the project is.. The example of Puzzles as elements of smart contracts or processes in the physical world is perfect and easy way to communicate the idea, which is missing in many projects.