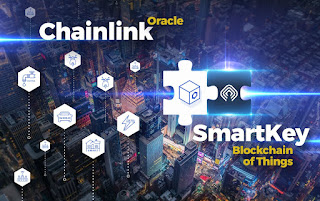 The cooperation with Chainlink is a combination of technologies: Oracles and BoT second generation (blockchain Of Things), which is the active management of sensors through relational SmartKey connectors.

The Chainlink ecosystem and dozens of companies using the Chainlink solution will receive access to BoT technology that allows for the management of physical values (physical active devices and sensors) thanks to a connector, i.e. a structure that not only collects data, but also manages it, which SmartKey specializes in.

Chainlink is the most widely used and safe way to power universal smart contracts. With Chainlink, developers can connect any blockchain to high-quality data sources from other blockchains as well as real world data.

Today, SmartKey is excited to announce a planned integration with market-leading oracle network Chainlink to bring life to smart cities of the future. Chainlink oracles will be used to connect SmartKey Ecosystem devices to real-world data from IoT networks, web APIs, and more, enabling them to execute actions based on that data. This will open up new data-driven smart contract use cases in IoT, such as automatic activation of emergency response systems during bad weather conditions, authorized access to gated municipal areas when city-wide alerts are issued, and many more future capabilities.

The announcement comes as SmartKey is also due to announce a partnership with the local government authorities of Warmian-Masurian Voivodeship, region with over 1 500 000 inhabitants in Poland.

The partnership will see SmartKey’s proprietary technology and devices used to give rescue services teams instant, blockchain-enabled access to all secure districts and buildings within the region in case of an emergency. This greatly reduces response times for fires and rescue services and has the potential to save lives.

The successful pilot project paves the way for other cities and regions, both in Poland and globally, to build smart cities of the future by leveraging the same decentralized blockchain technology infrastructure to not only connect to emergency services but other infrastructure elements, such as utilities and transport.

This project represents the first real-world use case for SmartKey technology with a government authority. SmartKey also has a collaboration with KIA cars, born out of an original car-sharing initiative, which allows KIA owners to build blockchain-based applications that control access to their vehicles.

SmartKey’s public access control framework offers several benefits to users, including a higher level of security than traditional remote access systems, the ability to coordinate access amongst multiple users (or restrict to just one), a framework for managing payments, and can act as an un-cloneable key. SmartKey’s vision is to deploy this solution across other sharing economy models such as accommodation, bike rental, or parking services.

As our preferred oracle network, Chainlink’s widely used oracle solution and its large global community will play a key part in SmartKey’s future.

Chainlink is the missing link in developing and delivering a virtually limitless number of smart city integrations that combine SmartKey’s API and blockchain-enabled hardware with real world data and systems to harness the power of automated data-driven IoT applications with tangible value.

The integration focuses on connecting all the data and events sourced and delivered by the Chainlink ecosystem to the SmartKey connector, which then turns that data (commands issued by Ethereum smart contracts) into instructions for IoT devices (e.g., active sensors GSM — GPS).

Our connectors can also deliver information to Chainlink oracles confirming these real world instructions were carried out (e.g. gate was opened), potentially leading to additional smart contract outputs. The confirmation of service delivery is a “contract key” that connects both ecosystems into one “world” and relays an Ethereum action to IoT devices.

The initial integration is based on rescue service authorities issuing commands to interact with smart city IoT devices such as parking gates, garage doors, and emergency response systems. These commands could come from specific apps or be based on external data sources (e,g. public issued alert). Chainlink decentralized oracle networks will then deliver this data on-chain to the smart contract, which then the SmartKey Ecosystem uses to trigger the necessary IoT action (e.g. open the parking gate). Smart contracts provide a method of automating the gate authorization process using a public issued alert, both accelerating the process time and documenting an immutable record on the blockchain of the municipal service carried out.

Another use case being explored is triggering an emergency services lockdown of gates and windows based on weather data for high wind speeds and hurricane warnings. This is really just the beginning, especially as we continue to onboard more IoT remote access devices like electric car charging stations, while Chainlink opens up datasets such as utility meters, weather controllers, pressure sensors, temperature gauges, liquid level movement, and mobile solutions (GPS and GSM). As IoT networks grow, Chainlink allows us to create an infinite number of integrations and new product ideas.

Why We Selected Chainlink

After evaluating different oracle solutions, we found Chainlink to be the most secure, reliable, and flexible network on the market, already widely adopted across numerous verticals, blockchains, and dApps.

Chainlink ensures that the SmartKey ecosystem acts on high-quality data feeds with secure and reliable on-chain/off-chain connections. Chainlink features of particular importance to SmartKey include:

Flexibility to connect with any type of off-chain API, allowing developers to trigger SmartKey functions with virtually any piece of off-chain data.

Decentralized infrastructure at both the data source and oracle node level, providing developers with highly available and manipulation resistant data and oracle services.

Ultimately, connection between both technologies allows physical IoT data to flow into the blockchain and securely trigger physical actions in the real world like the movement of a car, charging of a car battery, opening a private gate, and many others that are critical to smart city ecosystems. This secure, end-to-end automated data framework is a revolution in the blockchain implementation of smart cities.

“Integration between Chainlink and SmartKey empowers developers to build more advanced smart contract-based solutions that automate the actions of smart cities based on information from the physical world,” said SmartKey CEO Szymon Fiedorowicz.

“Our integration with rescue services in Olsztyn, the capital of Warmian-Masurian Voivodeship Poland is a first step towards building a smart city ecosystem, improving the speed at which rescue services get delivered to people and places — especially important during a pandemic. Thanks to Chainlink, we can now automate those services based on real-world data and apps in a highly secure and reliable manner.”

Chainlink is the most widely used and secure way to power universal smart contracts. With Chainlink, developers can connect any blockchain with high-quality data sources from other blockchains as well as real-world data. Managed by a global, decentralized community of hundreds of thousands of people, Chainlink is introducing a fairer model for contracts. Its network currently secures billions of dollars in value for smart contracts across the decentralized finance (DeFi), insurance and gaming ecosystems, among others.

Chainlink is trusted by hundreds of organizations to deliver definitive truth via secure, reliable data feeds.

SmartKey is the missing part of the puzzle that connects the world of decentralized finance (DeFi) and blockchain with the world of physical assets. Contact us If you want to participate in the development process or have an idea to use the technology. We are happy to provide you with our hardware devices or grant access to API!